A bit of history:

London’s tumultuous history dates back more than 2000 years. Although there are many rumors about London existing in prehistoric times (these rumors also involve giants), historians haven’t found any significant evidence of this. That being said, we’re still going to consider London to be really old.

Way back in the day, around 50 AD, Londinium, as they called it at the time, was founded by the Romans. Of course, like most Roman cities, the Romans set up shop on the river to allow strategic access to other major European areas. 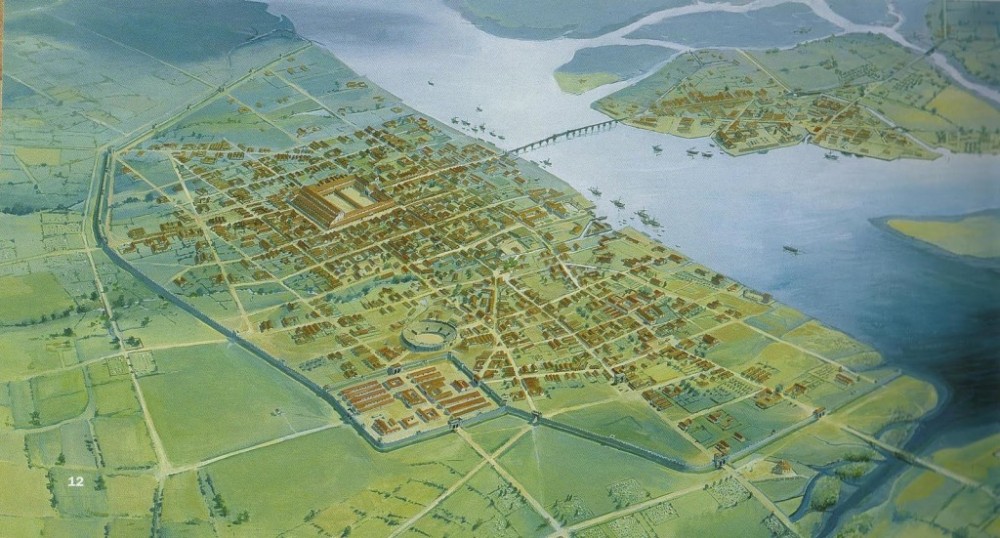 The very small town of Londinium was destroyed by the Iceni tribe in 60 AD as a prime target to revolt against Roman rule. However, the Romans quickly re-established control. Londinium was quickly rebuilt within 10 years and rapidly grew after that.

In the second century, Londinium was quite powerful and was home to over 60, 000 residents. The Romans had already built a large basilica, bath houses, forts, and temples in the area. It was also around this time that the Romans built a large wall surrounding Londinium that remained for over 1600 years and defined the perimeters of the city. Although the wall no longer stands, the perimeters of London are still generally outlined by where the wall once stood.

Until the end of the 5th century, the city was invaded many times, usually by Saxon pirates. The Roman Empire declined rapidly around this time and their rule in Britain officially ended in 410 AD. This wasn’t so good for Lonidinium. Practically all of its inhabitants left during this time and the city was left almost completely abandoned.

Years later, there was an Anglo-Saxon settlement in this area, but not until the 5th century – some historian suggest it wasn’t even until the 6th century. The population of that settlement is thought to have been between 10, 000 and 12, 000 residents.

By the 7th century, the London area was incorporated into the kingdom of the East Saxons, and in 604, King Saebert of Essex converted to Christianity. In the 650s, under the rule of a man named King Sigeberht II, the permanent establishment of Christianity took place in London and in all of the East Saxon kingdom.

Moving on to the 9th century. The VIKINGS! They attacked a bunch, and they just kept coming. A tenacious bunch. The London area was totally destroyed in 842 and again in 851. A Danish army known as the “Great Heathen Army” continually rampaged across England starting in 865, and they annexed the city, so London was under Danish rule until 886. In 886, however, there was another big fight between the Danish and the Mercia. The Mercia won and London was ruled by them for some time.

Around this time, the city became known as Hindenburg. The established settlement moved within the old Roman walls of London as a means of protection and defense (they were initially established just outside of the old Roman walls). The walls were repaired, as were bridges that were previously destroyed in battle.

In the 10th century, The Mercia King passed away and London was controlled by Wessez. London continued to grow and was a center for commercial wealth. Its importance in the political scene also increased. There were many political meetings and laws that were issued from London.

The 11th century was pretty rough for London. The Vikings struck again, sometimes successfully, sometimes not. The Vikings had taken over the majority of England in the early 1000s, but did not succeed in taking London until 1013. There were major battles between the English and the Danes in the years to follow and London remained under the Danes’ rule until 1042.

A guy called Edward the Confessor ruled London starting in 1042. We can thank him for the very famous Westminster Abbey. He spent the vast majority of his time hanging out here until he passed in 1066. Everything was fine and dandy until the Normans invaded the south bank of London and overtook the English. Under Norman rule, new fortresses were erected and many bridges, including the famous London Bridge, were built. The Palace of Westminister was also established. Much of London’s history and remaining buildings were created during this time.

In the Middle Ages, trade was increasingly steadily and London grew very quickly. To put this in perspective, London’s population was around 15, 000 in 1100. By 1300, the population was well over 80, 000. Then the plague hit and killed over half of London’s population. Terrible stuff. Their streets were narrow and the bridges made of wood and straw, making fires common and destructive. Despite all of these obstacles, London continued to proposer economically and politically.

In the 15th century, the Protestant Reformation was taking place around Europe, London being an early center for Protestantism in England. Trade and commerce was rising in London, and people were immigrating to London from all over Europe, increasing its population to over 225, 000 by the early 17th century.

In the 17th century, the over-crowded London was once again hit by the plague. This bout killed nearly 20 percent of London’s residents. Following this devastation, the Great Fire of London occurred in 1666, destroying over half of the city. In addition to homes, many important cathedrals and centers for business were destroyed. The city was largely rebuilt, using materials like brick rather than wood, ensuring a fire would never again ensue the same damage.

In the 18th century, London was still seeing continual and rapid growth. Immigrants, traders, and those seeking employment were moving to London. The industrial revolution was just beginning, and London was gaining political power in the British Empire. The city itself was growing and new areas like Mayfair and South London were established. In 1762, George III acquired the Buckingham palace from the Duke of Buckingham. Over the next 75 years, the palace was continually enlarged. During this time, there were many riots and revolts, often driven by protestant vs. catholic ideals. This led to great change and Enlightenment in the London area.

During the 19th century, London’s population grew from 1 million to 6.7 million making it the world’s largest city at the time. It became an international hub for politics, finance, and trade. A railroad system for transportation was built and London began to expand out into the suburbs. Although the railroad system was effective for transporting people to and from work, it also created a divide in the city. The wealthy all moved to the suburbs leaving the poor in the urban areas. Many people were dying as a result of water contamination in the city. In response, a massive sewage system was put into place and the death toll dropped dramatically. Also during this century, the city was divided up into 28 metropolitan boroughs, still in place today. Trafalgar Square, Big Ben, the Houses of Parliament, the Victoria and Albert Museum, the Tower Bridge, and the Royal Albert Hall were all established during this time.

The 20th century was a rough one for London, although there were some positives. London’s population was steadily and rapidly increasing. As a result, public transport was continually improving and expanding in the city and to the suburbs. That was all good. Sadly, there were many not-so-good things happening in the 1900s. First of all, the people of London were impacted heavily by unemployment during the Great Depression in the 1930s. Then of course the World Wars devastated London. The city experienced many bomb raids from the Germans during World War I. During World War II, things were even worse. London was bombed with over 18, 000 tonnes of explosives over 71 separate raids. Thousands of Londoners died, and thousands more were seriously injured. Many of London’s famous and historical buildings were either severely damaged or completely destroyed, and hundreds of thousands of Londoners were left homeless.

After the World Wars, London was devastated but optimistic for the future. Many multi-level apartments were constructed in the city to aid in housing those who had lost their homes during the wars. Many decided to branch out into London’s surrounding suburbs to find housing as well. The Olympics were held at Wembley Stadium in 1948, barely after the World Wars ended. People were immigrating from all over the world to live in London, making London Europe’s most ethnically diverse city. Very famous bands were coming out of London. The Beatles and the Rolling stones were products of the city, and London became a center for worldwide youth culture.

At the beginning of the 21st century, London constructed the famous London Eye which still draws millions of visitors each year. They hosted the Olympics in 2012, making them the first city in the world to host three times.

Although London has had a tumultuous history, the city thrives as a hub for global commerce, art, education, fashion, finance, healthcare, tourism, and entertainment. The city boasts over 8.5 million residents and sees over 17 million tourists each and every year. No matter your interests, London is sure to please. Whether you’re after site seeing, history, theatre, food, or fashion (or really anything else), London has it all.

Be sure to read about Our Trip, What to Know Before You Go, and Our Favorite Local Spots!